Menard Vacuum™ is used to accelerate consolidation of cohesive, highly compressible soils. The process consists in creating a negative pressure under an airtight membrane laid over the soil, which generates atmospheric pressure on the soil, equivalent to the pressure exerted by a 4 metre embankment. 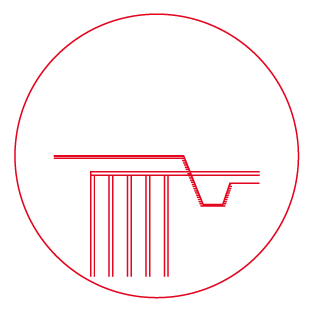 What is Menard VacuumTM and why do we use it?

When a load is applied on saturated cohesive compressible soils (clays, silts), the structure can settle for a long period of time (up to 10 to 20 years).

Menard Vacuum™ is a ground improvement technique, created and developed by Menard, which is used to control long term residual settlement in this type of soils within acceptable limits.

Cohesive soils (clayey soils) are generally characterised by having a low permeability. Consolidation of a cohesive soil relies on the ability to evacuate water out of the soil matrix and this process can be very long.

Menard Vacuum™ is an atmospheric consolidation system used to accelerate consolidation of cohesive, highly compressible soils. The process consists in creating a negative pressure under an airtight membrane laid over the soil, which generates atmospheric pressure on the soil, equivalent to the pressure exerted by a 4 meter embankment.

This technique can substantially reduce consolidation time thanks to early pre-loading as soon as the system is in place and without risk of ground failure. The isotropic nature of the Menard Vacuum™ load and the “artificial beam” generated by the vacuum between the horizontal drains and the membrane have a strong stabilising effect on the fill.

The procedure consists of installing a vertical and horizontal draining system combined with a vacuum pumping system under an airtight impervious membrane. The area is sealed by sealing the membrane into a network of peripheral trenches.

What are the advantages of the Menard Vacuum™?

Menard Vacuum™ can substantially reduce consolidation time. Early pre-loading implemented as soon as the system is in place makes it possible. This goes without risk of ground failure.

How so? The vacuum generates an “artificial beam” between the horizontal drains and the membrane. The isotropic nature of the Menard Vacuum™ load combined with the “artificial beam” have a strong stabilising effect on the fill.

What surface area is needed to use Menard Vacuum™?

The technique is rarely used on surface areas of less than 10,000 m².

During the entire pumping operation, the Menard Vacuum™ maintains the water table at the level of the horizontal drain network. This process does not lower the water table within or around the worksite.